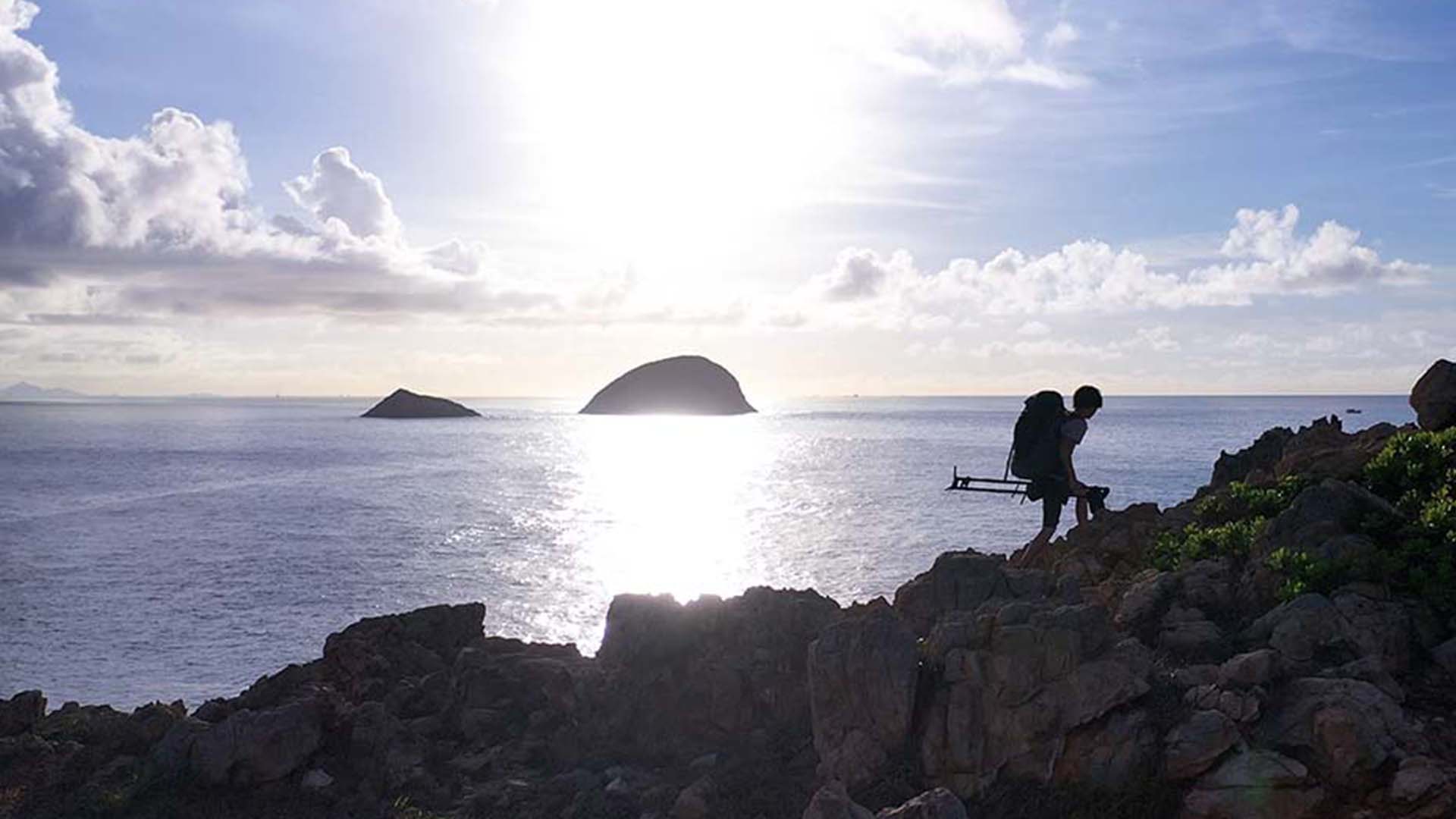 One breezy day last summer, globally acclaimed Hong Kong landscape photographer Kelvin Yuen Sze-lok was busy studying the weather forecast to check for clouds; meteorology is one of the many different interests he has acquired over the past eight years since turning his hobby into a full-time job.

Yuen had been looking to capture the perfect shot of the Ninepin Group — an archipelago of more than 20 islands off the southeastern shore of Sai Kung, in the eastern​ part of Hong Kong — for three years. The islands, known for their spectacular craggy coastlines of towering hexagonal volcanic rock columns, form part of Hong Kong UNESCO Global Geopark, which he regards as one of the world’s best “playgrounds” for landscape photography.

“In summer, the vegetation on the islands turns green — they make for great foreground images,” he says, describing that “perfect” image of South Ninepin Island he waited to capture at sunrise from North Ninepin Island after waiting overnight. “There was also a consistent mild southeasterly wind, which meant a clear blue sky with some clouds. The clouds add some interesting details in the photo’s background.”

Yuen knows the islands so intimately after photographing the Geopark’s landscapes regularly over the years that he was already starting to imagine how the light and colours would look because of the weather conditions while packing for the night and heading to Sai Kung on a hired boat.

“Accessibility is part of the beauty of landscape photography in Hong Kong,” he says. “You don’t need to drive for three hours to go to the shore… there is public transport 24/7.” In less than an hour, Yuen found himself immersed in North Ninepin Island’s wilderness, with his camera set up ready to capture that image.

A series of his images — including one of the northern lights in the sky above Tromso in Norway, and another of the Mars-like landscape in Utah in the United States — wowed judges enough for him to win the prestigious 2020 International Landscape Photographer of the Year Award. “The award meant a lot to me,” he says. “I had been focusing on landscape photography for three or four years by then and the award was one of my goals.” 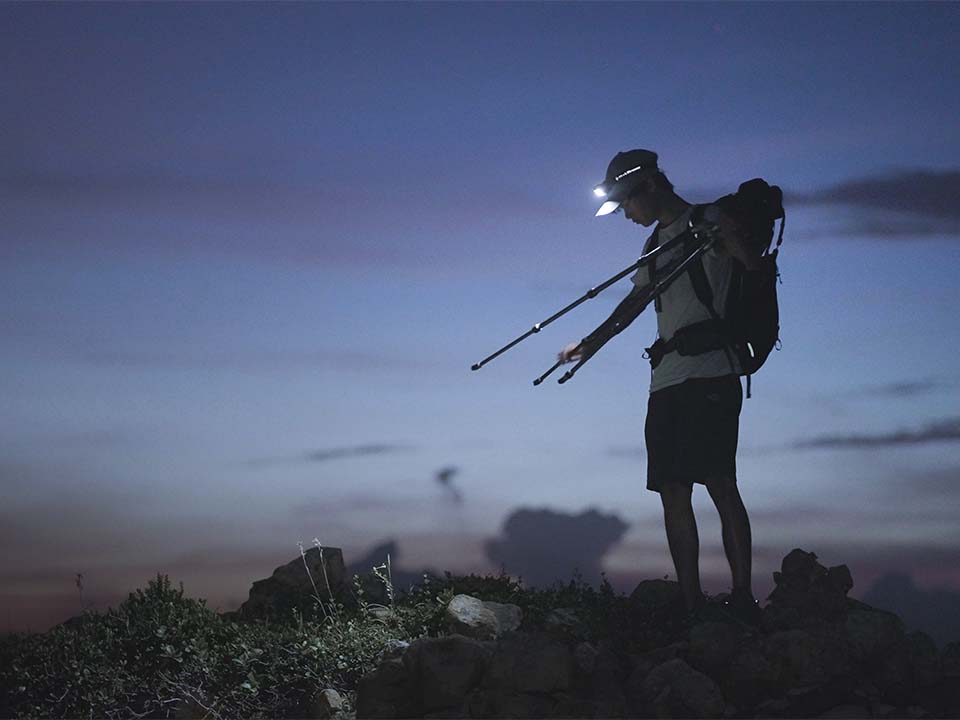 Yuen started photography at the age of 18, when his cousin gave him a second-hand camera in 2014. After climbing into the mountains to take his first photographs looking down on a sea of clouds over Lion Rock — a craggy 495-metre peak overlooking Kowloon — Yuen knew he wanted to do landscape photography for the rest of his life.

“The view from the peak really inspired me — I never knew that Hong Kong had such spectacular natural scenery,” he says. “That was when I fell in love with nature.”

“When I’m photographing the city’s natural landscapes, I often lose all track of time because I’m so absorbed in what I’m doing. That’s why I know photography is my purpose in life.”

Yuen won his first international photography award in 2015, which encouraged him to look afresh at the city’s natural scenery — away from the city’s urban centre. “[It made me think] I might be able to promote more facets of Hong Kong through the power of photography,” he says. “Hong Kong’s cityscapes have been very well documented, but its natural scenery deserves more exposure.”

Yuen started to work as a landscape photographer after graduating with a degree in applied biology from Hong Kong Baptist University in 2018. He has photographed dramatic landscapes in many countries around the world, but the city’s Geopark will always hold a special place in his heart, he says.

“From the shapes of the mountains to the curves of the shorelines, I have never seen anything similar elsewhere. It has also played an important role in helping me become the landscape photographer I am today. There have been few other landscape photographers focusing on the Geopark, so I have had a chance to experiment and discover new things by myself.” 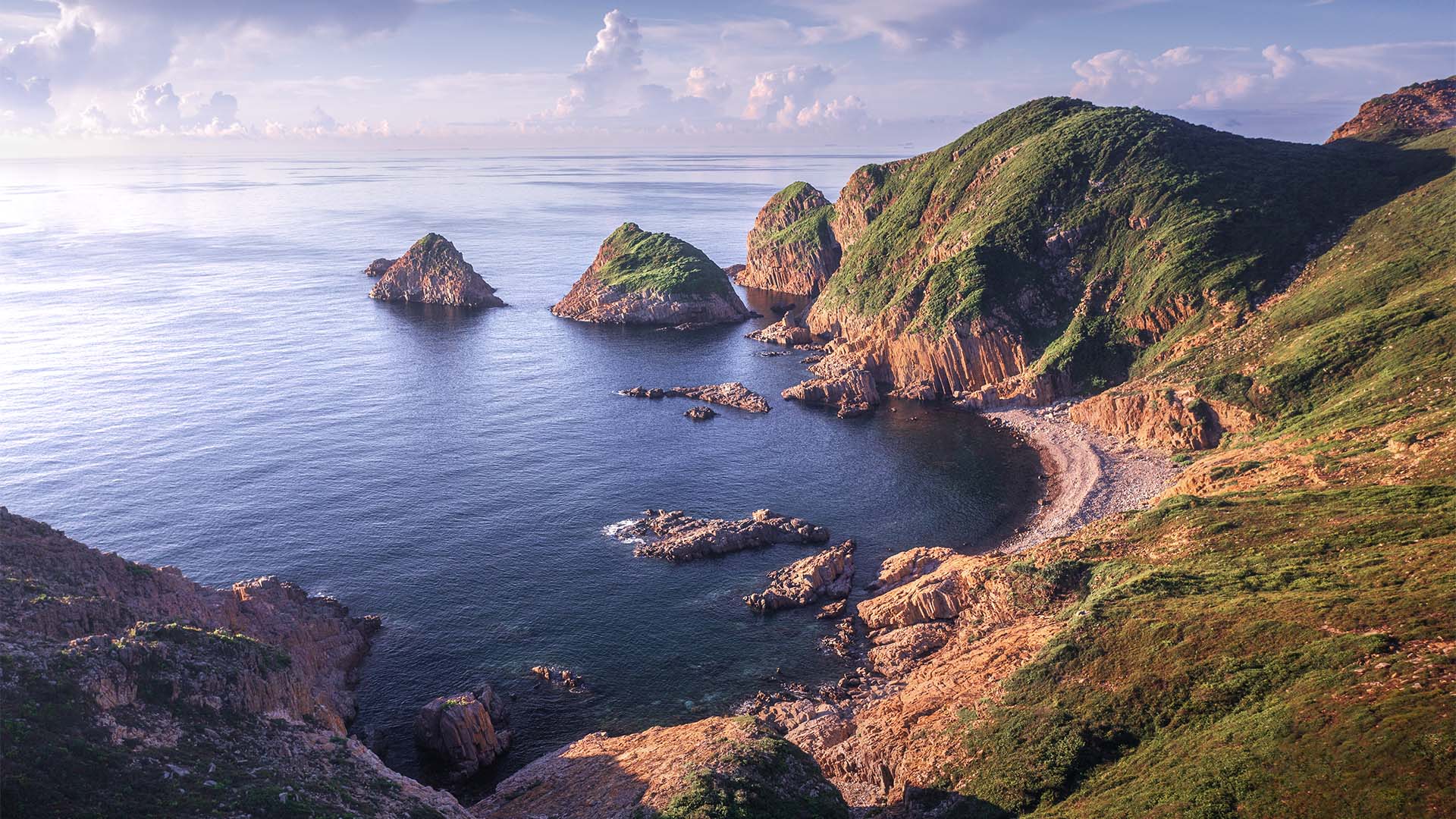 The Geopark’s large, light-yellow-coloured, hexagonal volcanic rock columns rising up from the sea to the south of Sai Kung are some of his favourite subjects to photograph.

“They are a rare sight elsewhere in the world,” he says because most other hexagonal rock columns abroad are black.

Yuen recommends visiting both Ung Kong Group — comprising Bluff Island, Wang Chau and Basalt Island, which are known for their steep cliffs and numerous sea arches — and Ninepin Group, off Sai Kung’s southeastern shore, to see many dramatic and rare vistas. The rugged islets jutting out from the sea around South Ninepin Island are great for taking atmospheric shots when captured from afar, he says.

The islet of Jin Island, for example, looks like a goldfish wiggling its tail from the air when photographed with a drone, while a towering rock on the cliffside of Bluff Island looks like a praying hand when viewed from a boat.

“Every island is special,” Yuen says. “​​They look like some places that are out of this world — you wouldn’t think they look like Hong Kong,” he says. 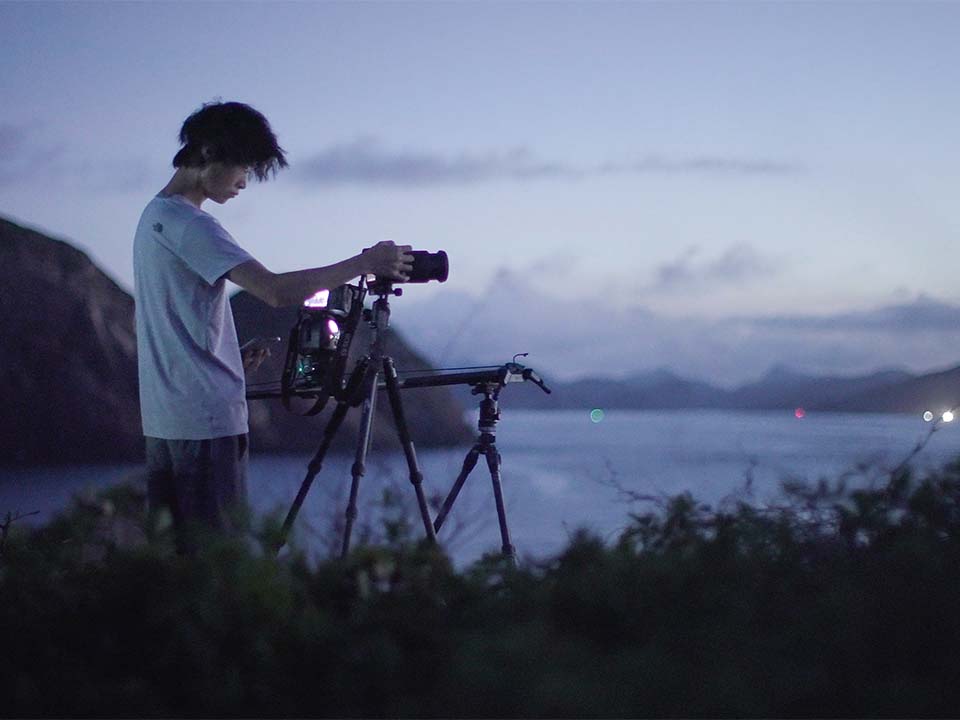 Yuen, who uses handheld cameras, tripods and drones to take his images, often spends more than 10 days a month venturing around the Geopark — from looking for a new angle to waiting for the right moment to take a photo. For photography buffs who are less familiar with the Geopark, he recommends they take a guided boat tour and bring a camera and both a telephoto lens and a wide-angle lens.

“As most travellers will view the islands from a boat, a telephoto lens will allow them to take close-up photos of the textures of the hexagonal rock columns,” he says. “If you are passing through narrow gorges or beside sea arches, you can use a wide-angle lens to photograph them from a low angle to create a photo with striking perspective and power.”

Yuen is now planning a three-month, round-the-world working trip, and can’t wait to use the new techniques he has been learning in the Geopark over the past few years, while the COVID-19 pandemic has halted international travel.

“Photographing the Geopark has taught me how to improvise and find the best angle for various landscapes quickly,” he says.

Few experiences of landscapes abroad can surpass the feeling of watching the sun rise at Hong Kong’s Geopark, Yuen admits.

“When the first rays of orange-coloured sunlight shine on the islands, it looks like something from a fairy tale,” he says. “Most [Hong Kong residents] live in the busy urban centres, but just an hour or so from your home, you can be on this uninhabited island, watching the sunrise in the middle of the ocean. That is so special.” 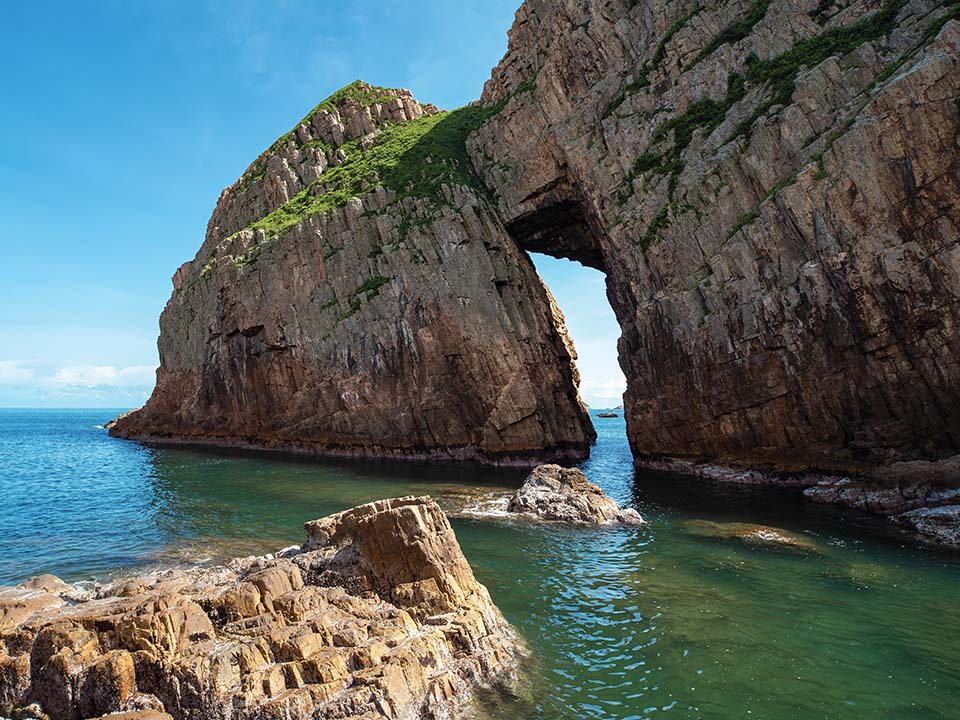 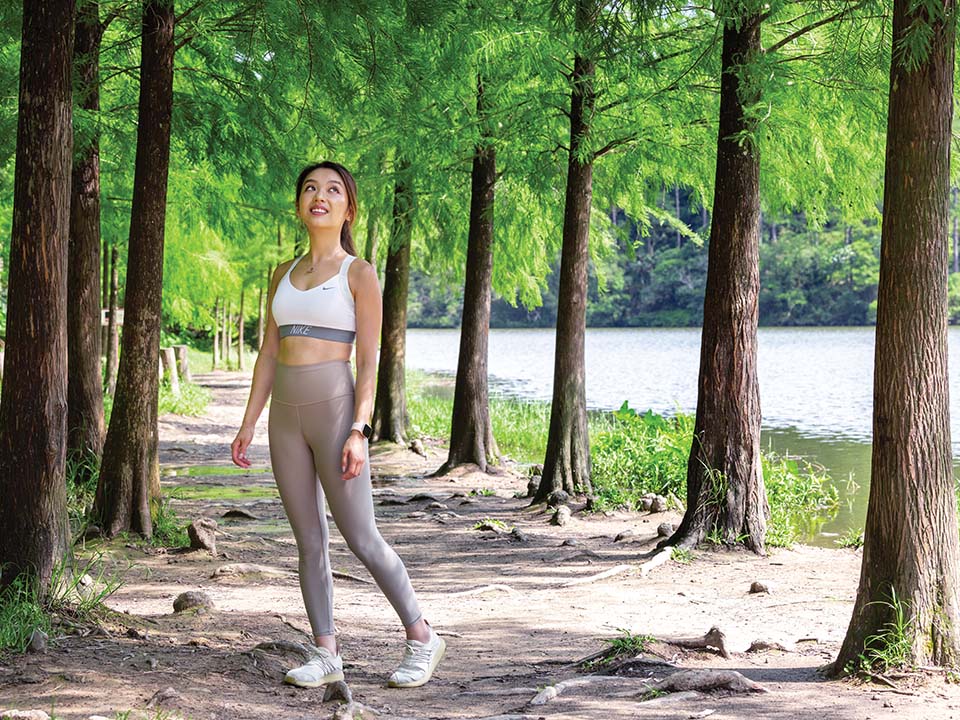