Exploring Old Town Central is like taking a trip back in time. The neighbourhood, which encompasses Central and Sheung Wan, was where some of the earliest chapters of modern Hong Kong history unfolded. Today, about 180 years since the British first settled at Possession Point, this district is still home to cobblestone streets, heritage buildings, traditional temples and other fascinating landmarks that illustrate its storied past and its early role in shaping the cosmopolitan city of Hong Kong as we know it today.

The beginnings of modern-day Hong Kong 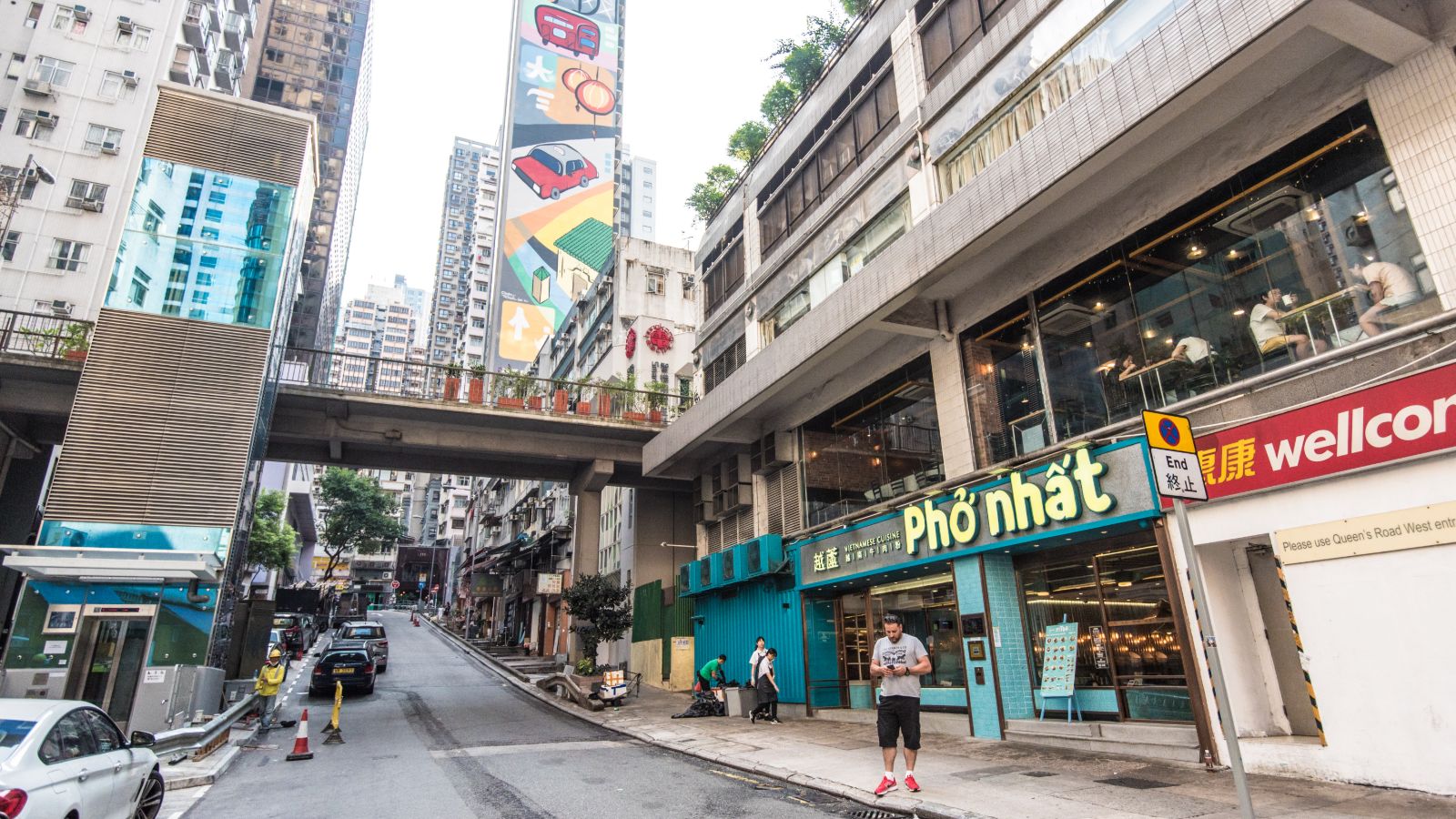 Ordinary as it may seem, Possession Street has a significant place in the history of Hong Kong. On 25 January 1841, the British navy arrived at nearby Possession Point (now Hollywood Road Park) and began 150 years of colonial rule, marked by a flag-raising ceremony the day after the initial landing. Originally perched on the waterfront, Possession Street was given a new lease of life through reclamation. The area is now dotted with hip restaurants and boutiques, alongside historic stores where you can still sample a taste of an older Hong Kong. 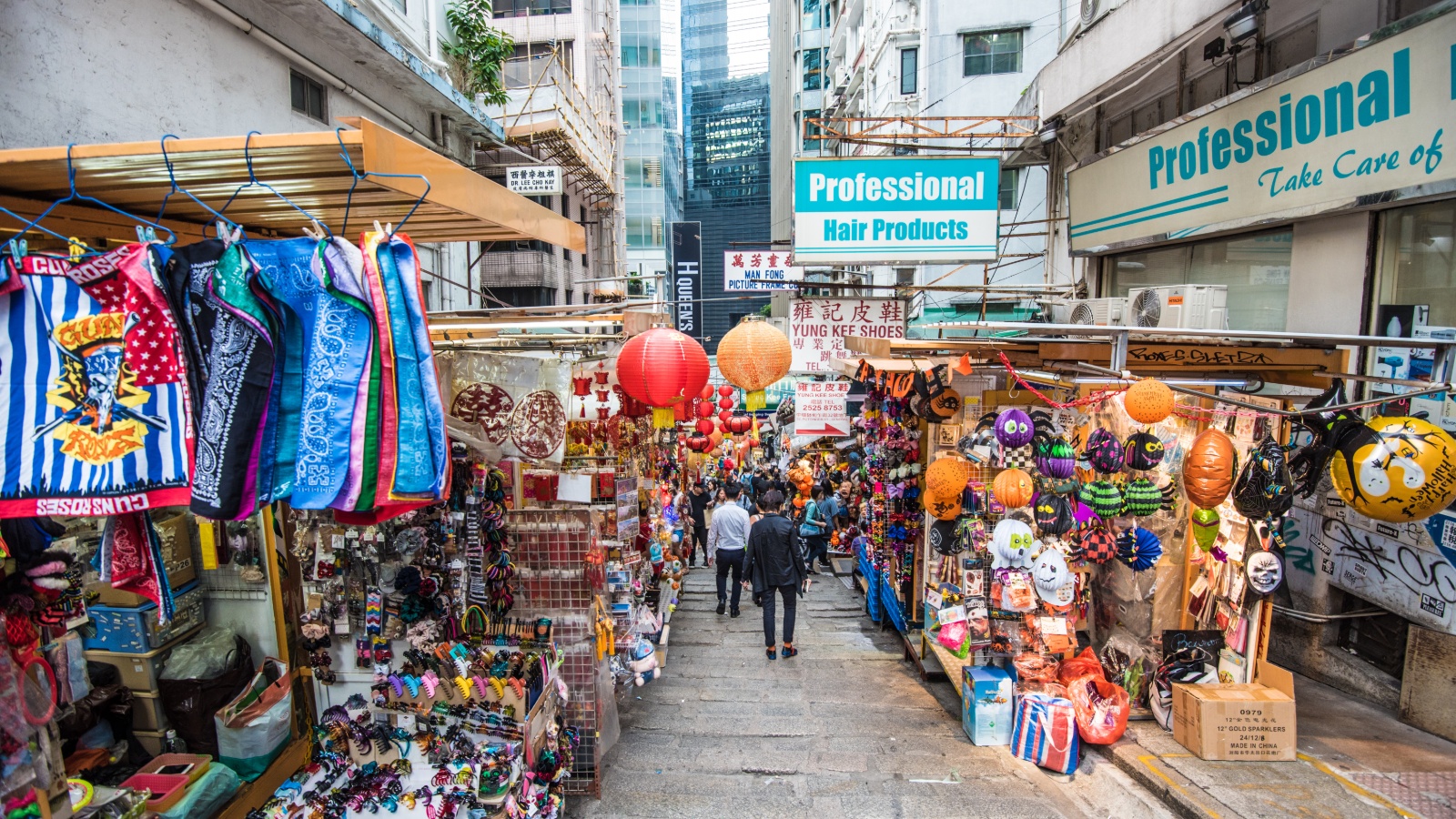 Pottinger Street and its surrounding area give a good sense of what the lives of Central’s early dwellers would have been like. The stone slabs spanning the entire street were laid in an irregular manner for a reason: some sections of this street between Hollywood Road and Connaught Road Central were particularly steep, and the uneven pavement made it easier for commuters and merchant-bearers to walk on while also allowing rainwater to flow down. Because of the unique design, locals still refer to it today as ‘Stone Slab Street’.

There were stalls on either side of the street when it was constructed in the 19th century. Originally, they sold household goods, or offered services such as shoe and pot repairing, as well as clothing alteration. Today, as consumer habits have changed, most of them sell festive costumes or handicrafts. 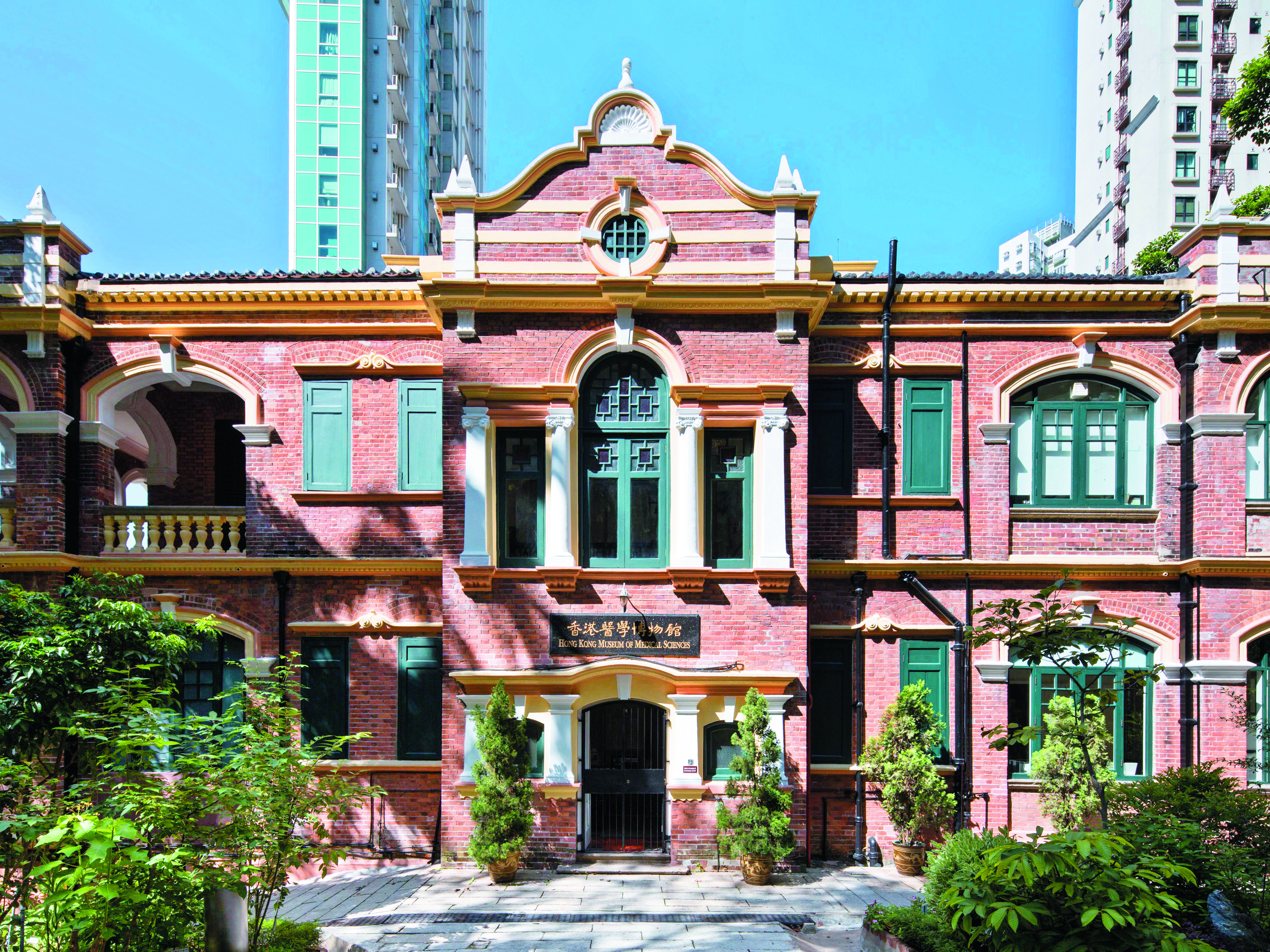 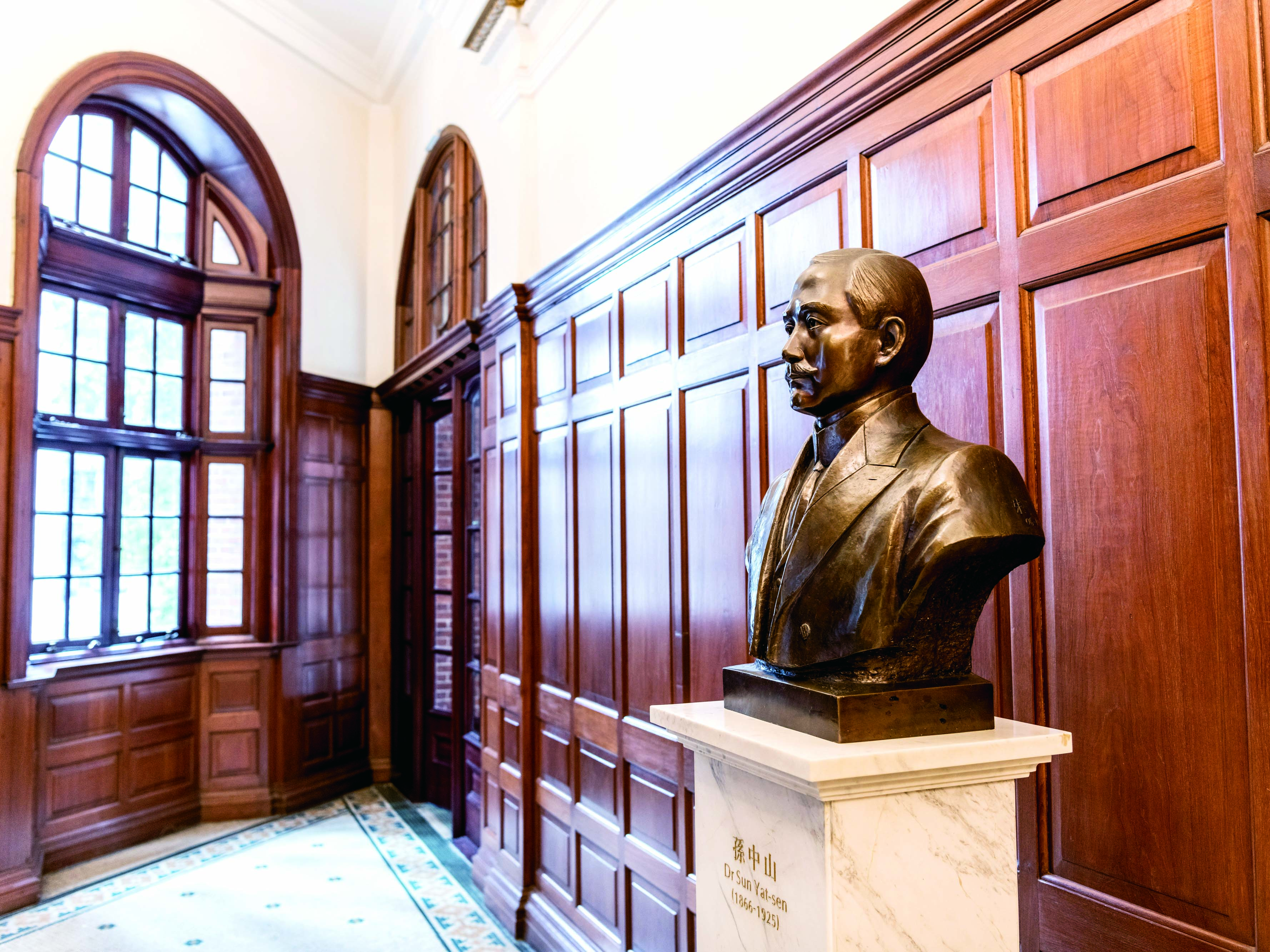 Despite its Edwardian-style façade – complete with Greek columns and stained glass windows – this four-storey museum is dedicated to the life and achievements of Dr Sun Yat-sen, who was an instrumental figure in the establishment of the Republic of China.  Dr Sun Yat-sen Museum Get me there {{title}} {{taRatingReviewTotal}} {{taRatingReviewText}} Address {{address}} Website {{website}} More info includes two permanent exhibitions that showcase artefacts from Dr Sun’s eventful life and career, and also highlights the statesman’s close ties to Hong Kong, where he received his secondary and university education and began to nurture some of his progressive ideas.

Hong Kong’s architecture was greatly enriched when Western and Chinese influences came together during the colonial era. The Bridges Street Centre of the Chinese YMCA of Hong Kong , which is just steps away from the Hong Kong Museum of Medical Sciences, is a perfect case in point. Completed in 1918, the centre is a six-storey blend of Chicago School architecture and Chinese roofing techniques. In the early 20th century, it was a major social centre for the Chinese youth community and boasted enviable facilities, such as a fitness centre, restaurants and a hostel, as well as Hong Kong’s very first indoor swimming pool. 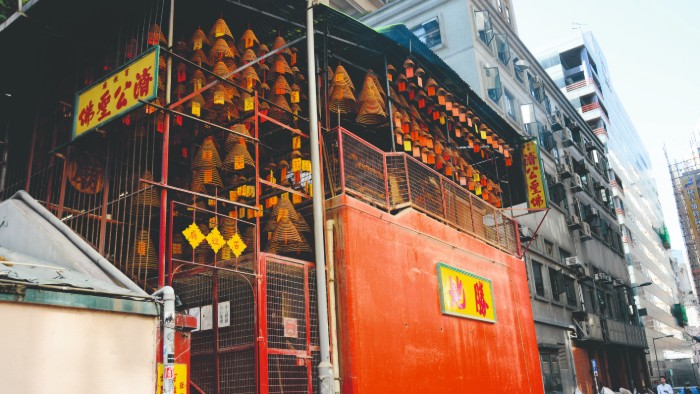 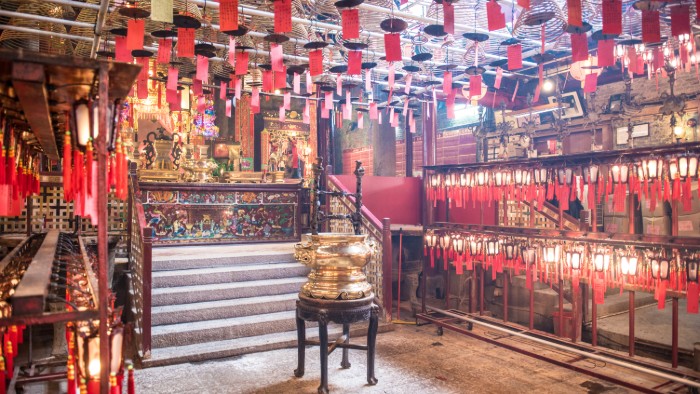 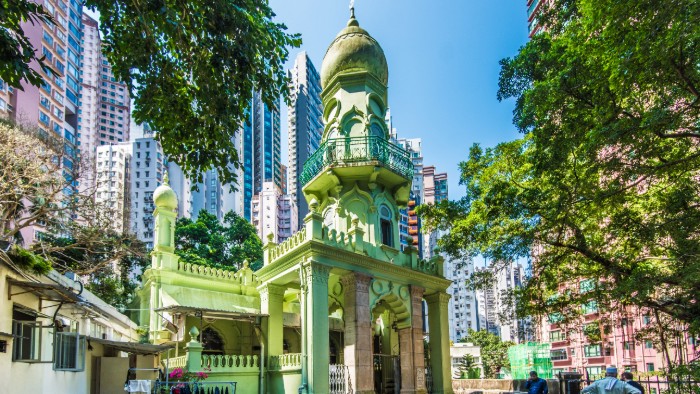 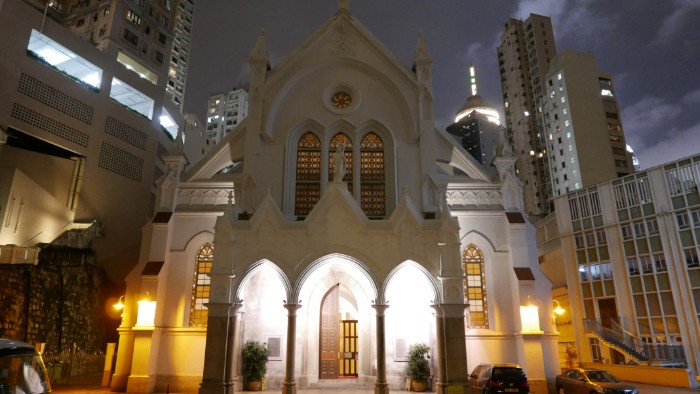 Catholic Cathedral of the Immaculate Conception

Walk up from Possession Street and you will find yourself at Tai Ping Shan Street . A number of distinctive ancient temples line the two sides of this 300-metre-long path. The most eye-catching of them all is probably the smoky, red temple called Kwong Fook I Tsz. Built in 1856, it is a classic example of a temple that fulfilled diverse roles. It was an ancestral temple for migrant families, a shelter for the ill and also housed memorial tablets for immigrant workers who passed away while in Hong Kong. Also be sure to visit Kwun Yum Temple near the staircase, and the unassuming Fook Tak Palace — all of which are still frequented by worshippers.

A five-minute walk from Tai Ping Shan Street, Man Mo Temple is a stunning complex estimated to have been built more than 150 years ago. It comprises three blocks, each serving different purposes. The namesake structure, Man Mo Temple, pays tribute to the God of Literature and the God of War, while Lit Shing Kung was created for all heavenly gods. Finally, Kung Sor was an assembly hall for resolving community disputes.

A great place to visit for history lovers, the well-preserved historic building houses a bronze bell dating back to 1847 and a sedan chair from 1862. The structure itself is just as fascinating, and comprises granite pillars, granite door frames, engraved wood plaques and ancient mural paintings.

You can easily recognise Hong Kong’s oldest mosque by its mint-green facade and gorgeous Islamic-influenced architecture. With its Arabic-style windows and gates, the Declared Monument stands out among its Mid-Levels surroundings. Aside from being a place of worship for Muslims in Hong Kong, Jamia Mosque is also an important historic landmark that dates all the way back to the 1840s.

Catholic Cathedral of the Immaculate Conception

The Catholic Cathedral of the Immaculate Conception was moved to this quiet Mid-Levels location after its previous incarnation was destroyed in a fire. Built in the late 1880s, the church is a stunning example of gothic architecture and was constructed in a cruciform shape with a central spire. The structure has been designated a Grade I historical building and was also also given an Honorable Mention by the UNESCO Asia Pacific Heritage Conservation Award in 2003 following its extensive renovation. Equally stunning inside, the cathedral is open for mass every Sunday and for public visitations from Monday to Saturday. Advance bookings are highly recommended. 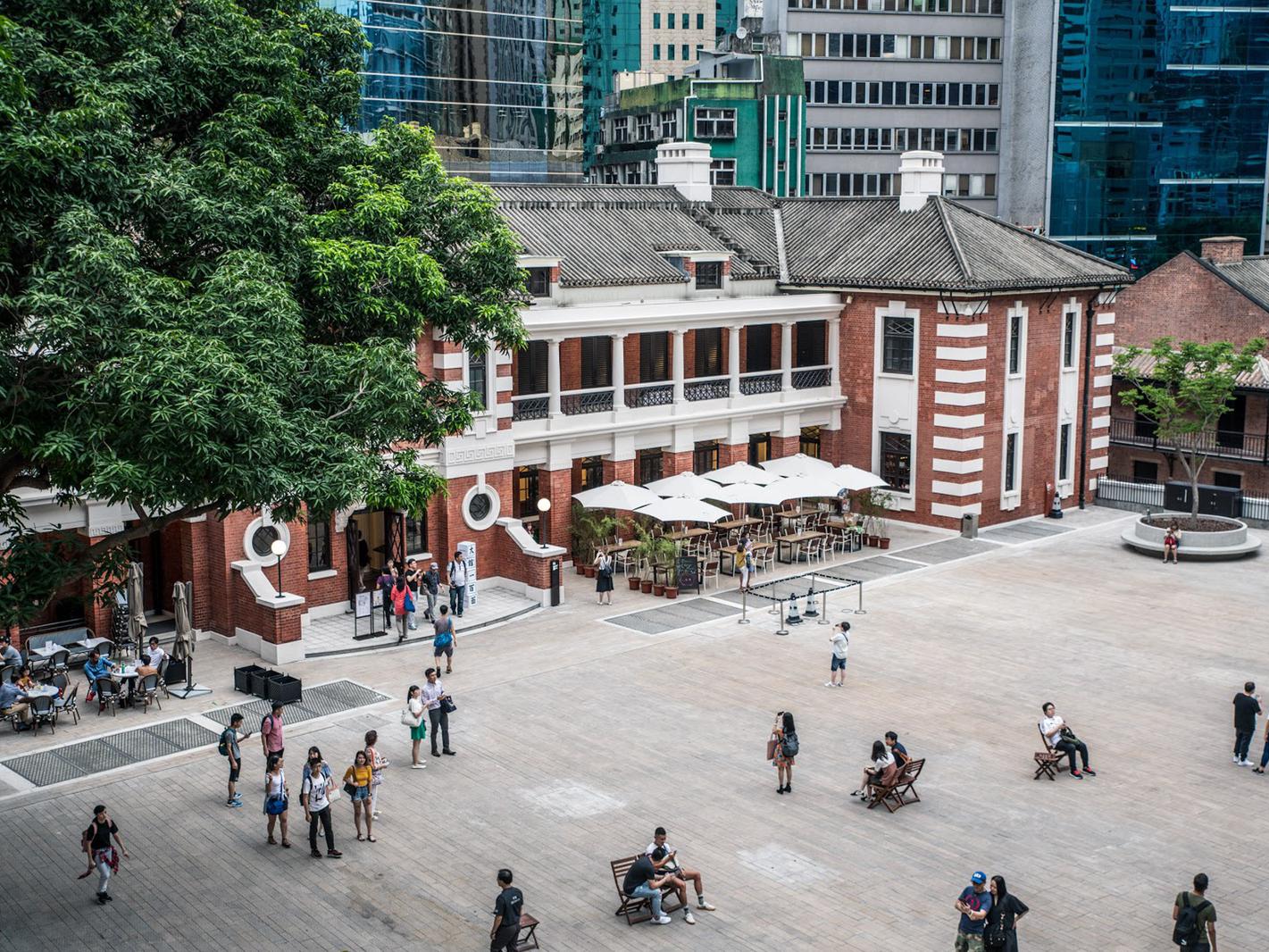 Tai Kwun Get me there {{title}} {{taRatingReviewTotal}} {{taRatingReviewText}} Address {{address}} Website {{website}} More info , meaning ‘big station’ in Cantonese, was a nickname for the former Central Police Station Compound, which boasts a history of more than 170 years. The site comprises 16 heritage buildings – all magnificent works of architecture. The former Police Headquarters, for example, is a resplendent example of Neoclassicism while the barracks, built between 1862 and 1864, is known for its distinctive Roman-style arch.

Wonderfully preserved, the historical site has since been transformed into an arts and culture hub – and one of the largest conservation projects to date in Hong Kong. Along with two newly built structures, the original buildings now house art galleries, retail shops and various bars and restaurants. Tai Kwun also hosts curated art exhibitions, performances, workshops, film screenings and guided tours, so be sure to check ahead for schedules and details. 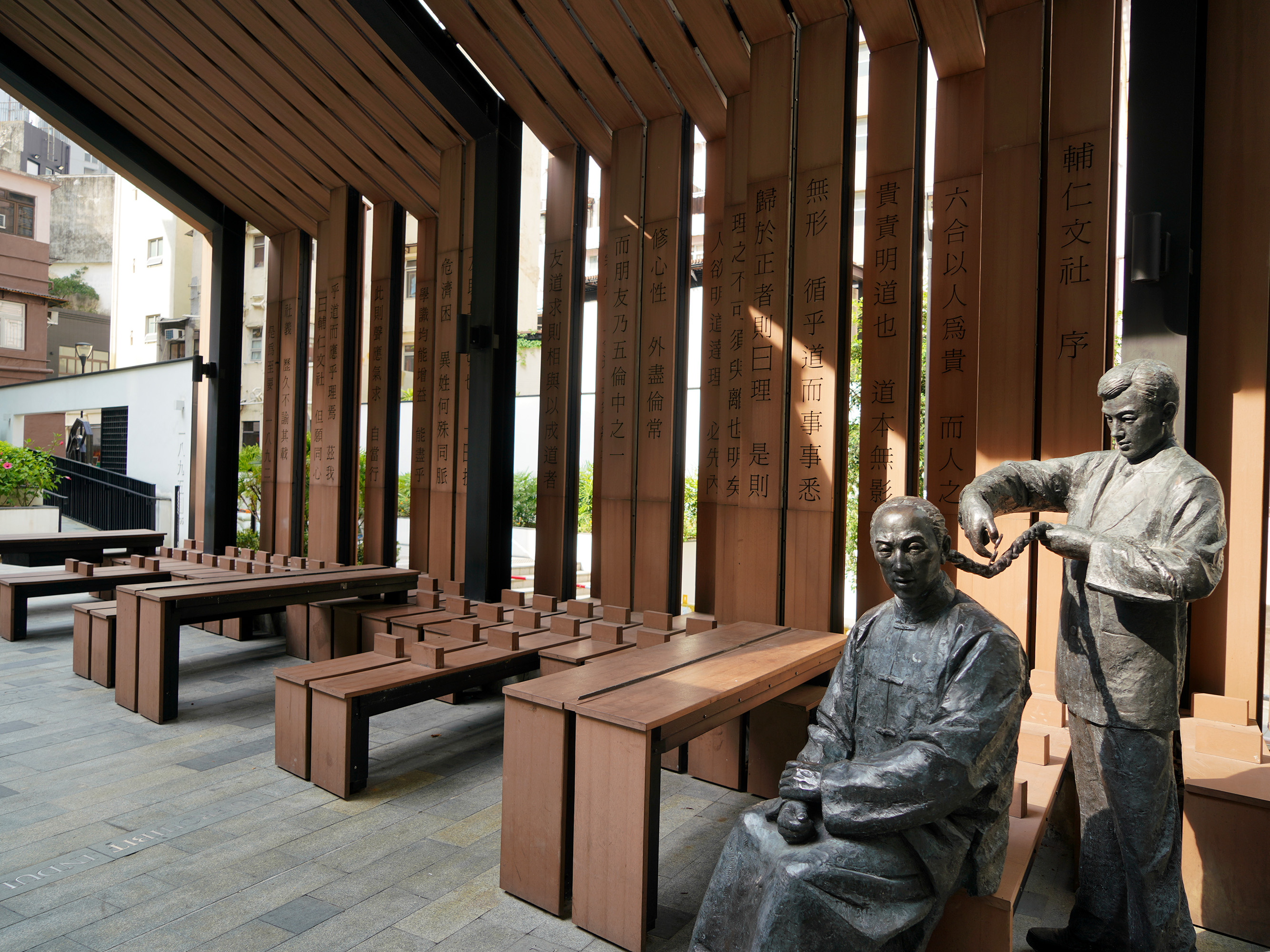 From Tai Kwun, walk down Hollywood Road and you’ll soon reach Pak Tsz Lane Park Get me there {{title}} {{taRatingReviewTotal}} {{taRatingReviewText}} Address {{address}} Website {{website}} More info , one of the 16 stops along the Dr Sun Yat-sen Historic Trail. This tranquil patch of green was built to commemorate the achievements of the Furen Literary Society, which was founded by revolutionary leaders Yeung Ku-wan and Tse Tsan-tai on 13 March 1892. The group eventually merged with Dr Sun’s Revive China Society and was heavily involved in the 1911 Chinese Revolution. Revitalised with an urban architectural design, this memorial park features exhibition panels, interactive facilities and an educational playground that traces the society’s history and revolutionary activities. 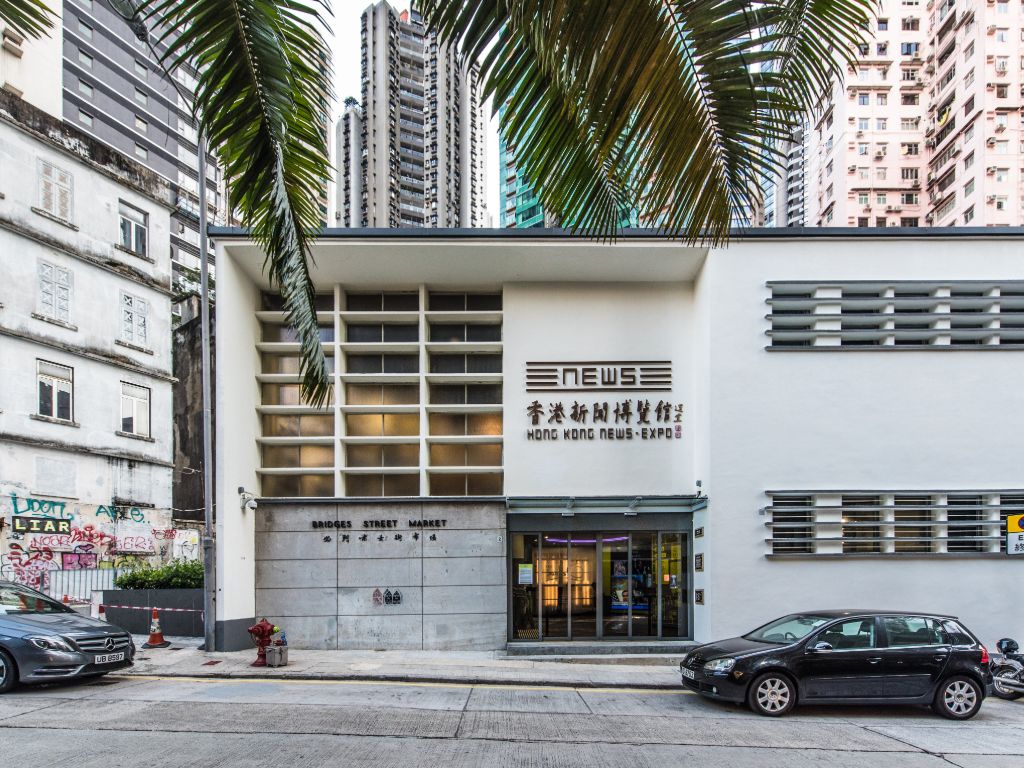 The former Bridges Street Market has undergone a massive transformation to become the Hong Kong News-Expo Get me there {{title}} {{taRatingReviewTotal}} {{taRatingReviewText}} Address {{address}} Website {{website}} More info , Asia’s first exhibition and education facility to showcase and celebrate the role of media and journalism in Hong Kong. The Grade III historic building houses interactive exhibitions demonstrating the development of local media, spanning from its infancy in the form of newspaper and radio to television and digital media. Join the free seminars, workshops and guided tours for a deeper understanding and appreciation of Hong Kong press. 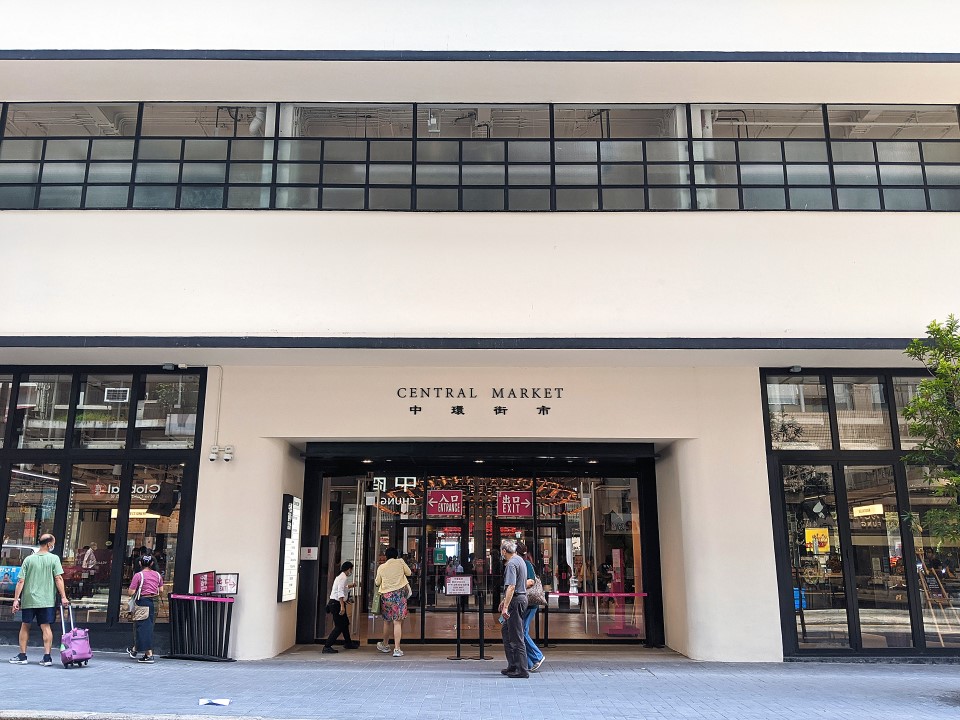 One of the revitalisation projects under Urban Renewal Authority and managed by Chinachem Group, the revitalised Central Market Get me there {{title}} {{taRatingReviewTotal}} {{taRatingReviewText}} Address {{address}} Website {{website}} More info is one of the latest developments in Central. Coveringover a 12,000-square-metre area, the Grade III historic building, located between Queen’s Road Central and Des Voeux Road, has been converted into a ‘Playground for All’, offering experiences and venues for dining and retail aimed at connecting the local community to the neighbourhood’s history, tradition, and contemporary culture. 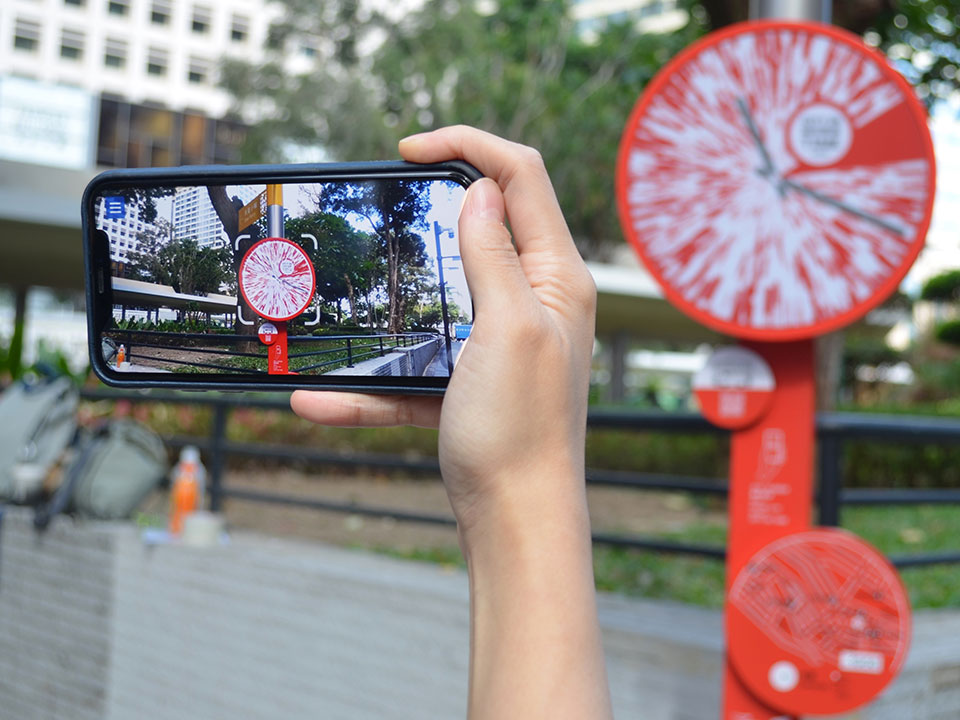 At the junction of Pottinger Street and Hollywood Road, scan the decorated pole to download the CITY IN TIME app and travel to the 1930s to the area currently known as Tai Kwun, Pottinger Street and the nearby neighbourhood. CITY IN TIME Get me there {{title}} {{taRatingReviewTotal}} {{taRatingReviewText}} Address {{address}} Website {{website}} More info  brings Hong Kong’s extraordinary history back to life by transforming smartphones into magical ‘augmented reality’ windows, contrasting 360-degree panoramic images of old Hong Kong with today’s surroundings. The historical scenes are supplemented with lively animations, informative descriptions of major landmarks, and selfie and sharing functions for uploading to social media platforms. For more details about nearby scenes and the CITY IN TIME project, please visit their website. 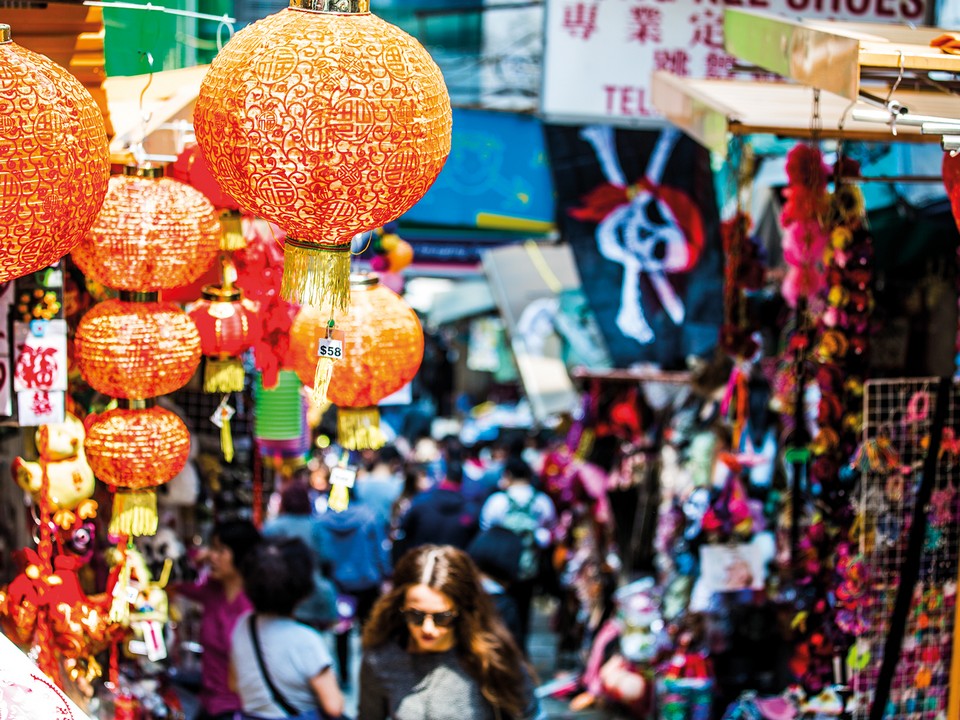 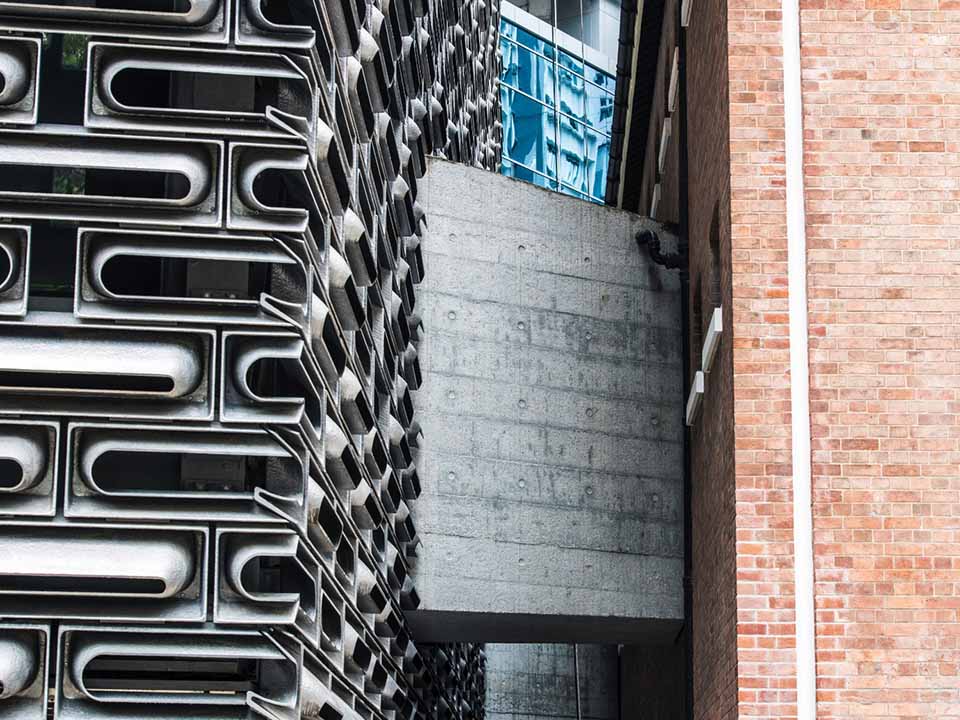