Hong Kong takes pride in its first-class cruise terminals, which are equipped with quality facilities and services to satisfy the savviest of globetrotters. By maintaining close collaboration with our trade partners, we ensure the smooth running of the Asia Cruise Cooperation and strive to cultivate healthy source markets in order to strengthen Hong Kong’s position as one of the most sought-after cruise destinations. 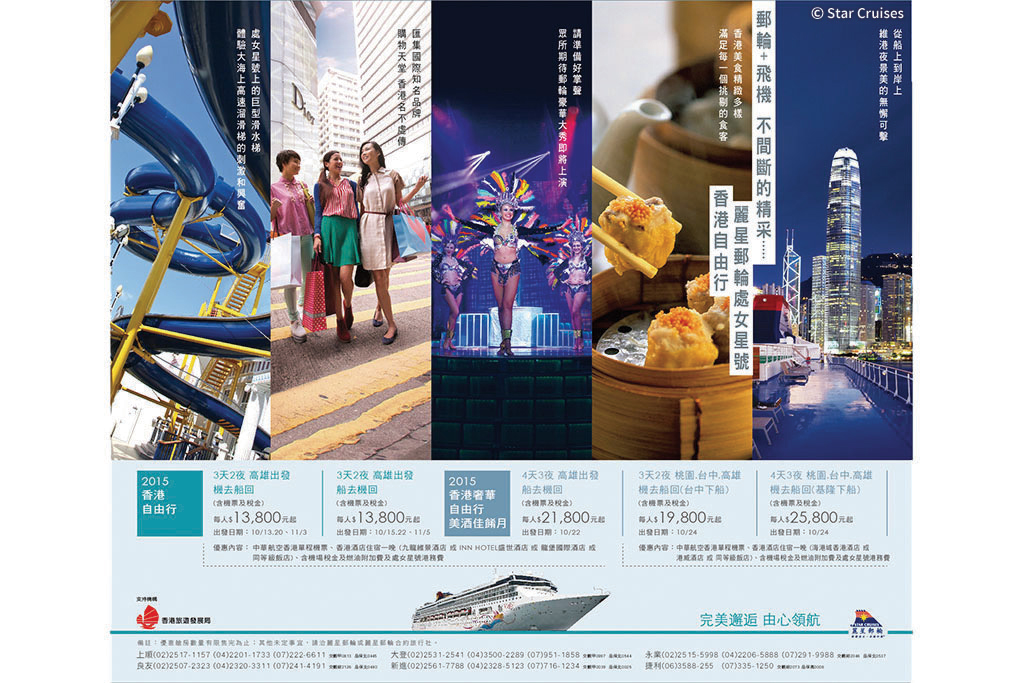 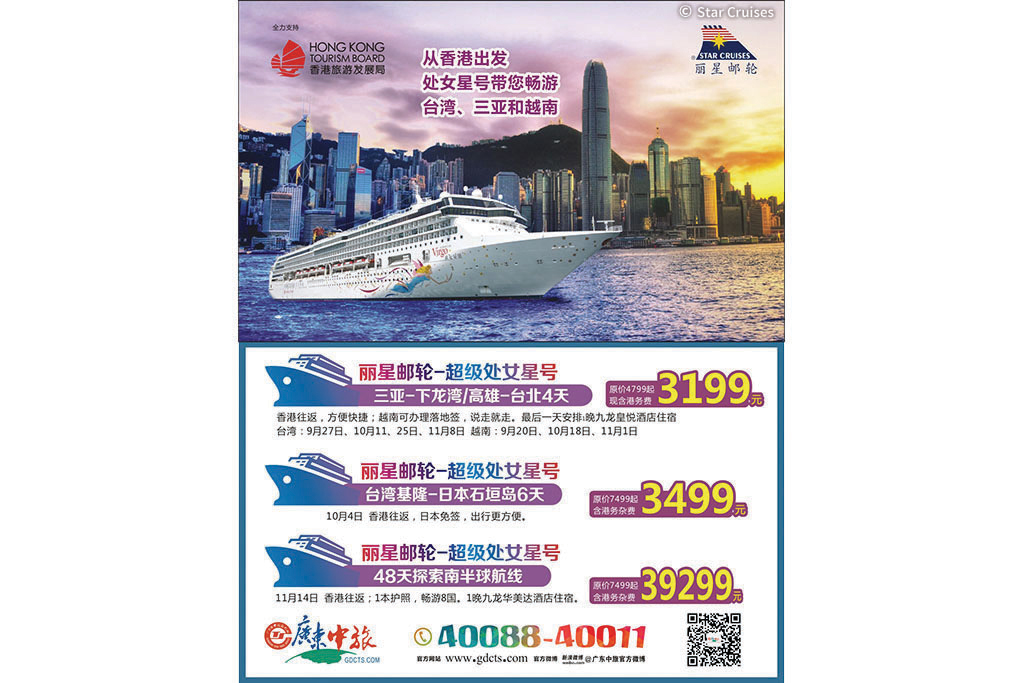 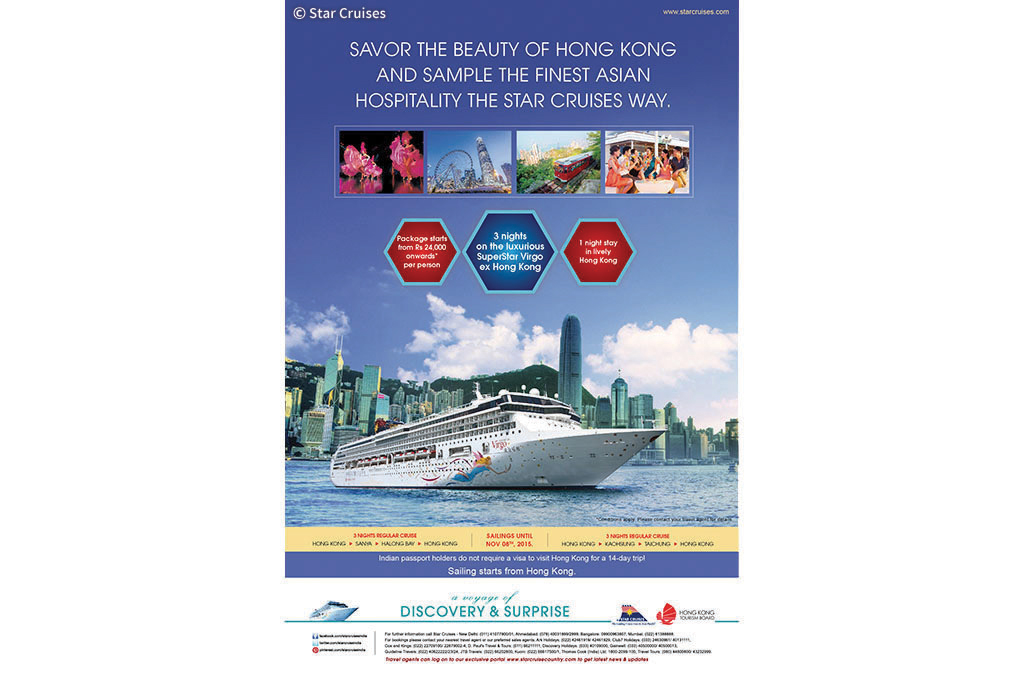 In 2015/16, we cultivated source markets through initiatives to generate consumer demand and educated consumers in key target markets on the uniqueness and attractiveness of cruise vacations.

For example, the HKTB and Star Cruises launched a series of trade and consumer marketing campaigns in the Mainland, Japan and India to promote SuperStar Virgo’s homeport sailings from Hong Kong. We also initiated various market-activation campaigns in Indonesia, Malaysia, the Philippines and Taiwan to build up the city’s profile as an exciting cruise destination.

We focused on leveraging the popularity of local celebrities and the mass media in our source markets to enhance awareness of Hong Kong’s cruise offerings. Some of the media we partnered with included Lonely Planet Magazine India and Zoom TV in India, MNCTV in Indonesia, GMA News in the Philippines, and Asahi Shimbun in Japan. 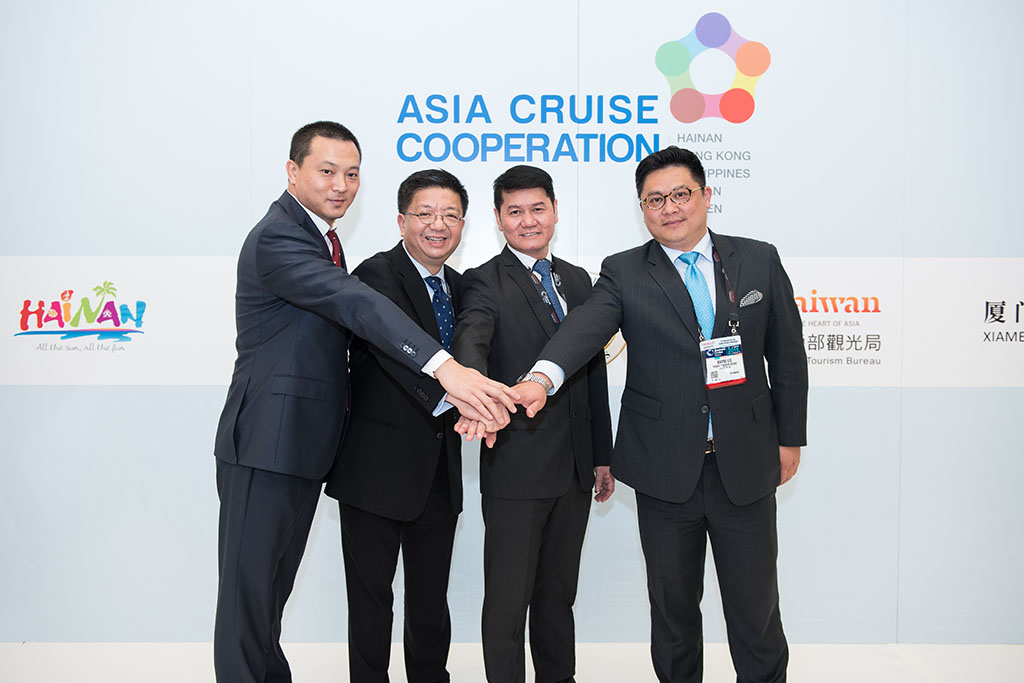 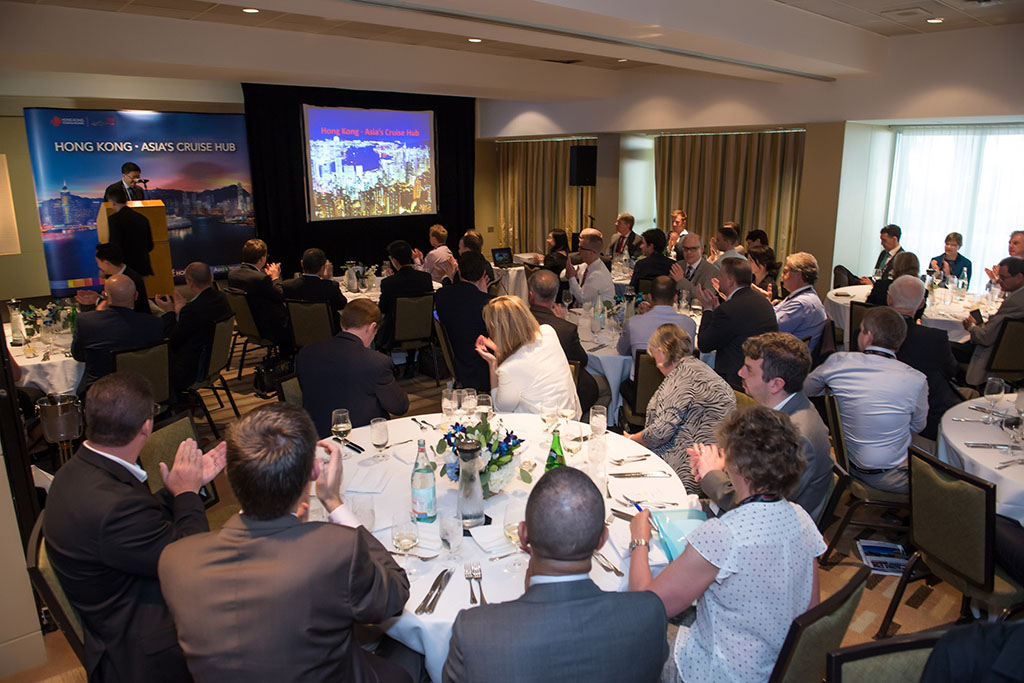 Riding on the success of the Asia Cruise Fund (founded in 2014) and Xiamen’s entry since January 2016, we elevated the alliance into the Asia Cruise Cooperation (ACC), providing a one-stop platform to support cruise lines’ development in Asia and reflecting our commitment to maximise the growth of cruise tourism in Asia.

We announced the exciting news of the ACC’s establishment at Seatrade Cruise Global 2016 in Florida. The annual event, attended by over 11,000 delegates, exhibitors, key cruise executives and media from around the world, has for years proven to be a great occasion for us to showcase Hong Kong’s cruise tourism offerings to the world. We also attended other international and regional cruise industry events to increase Hong Kong’s exposure. 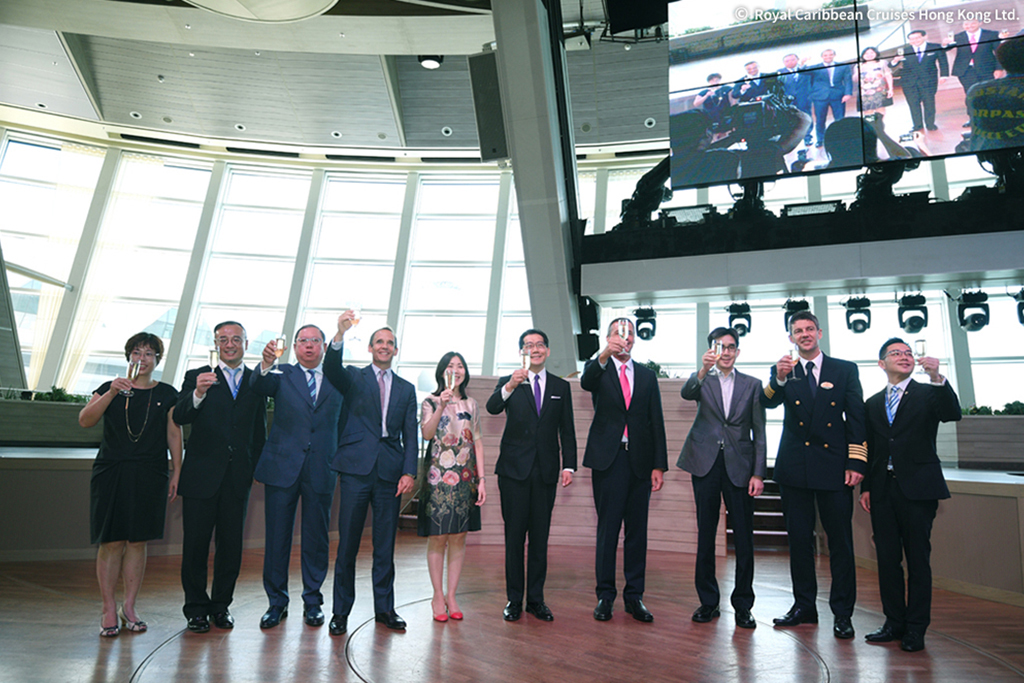 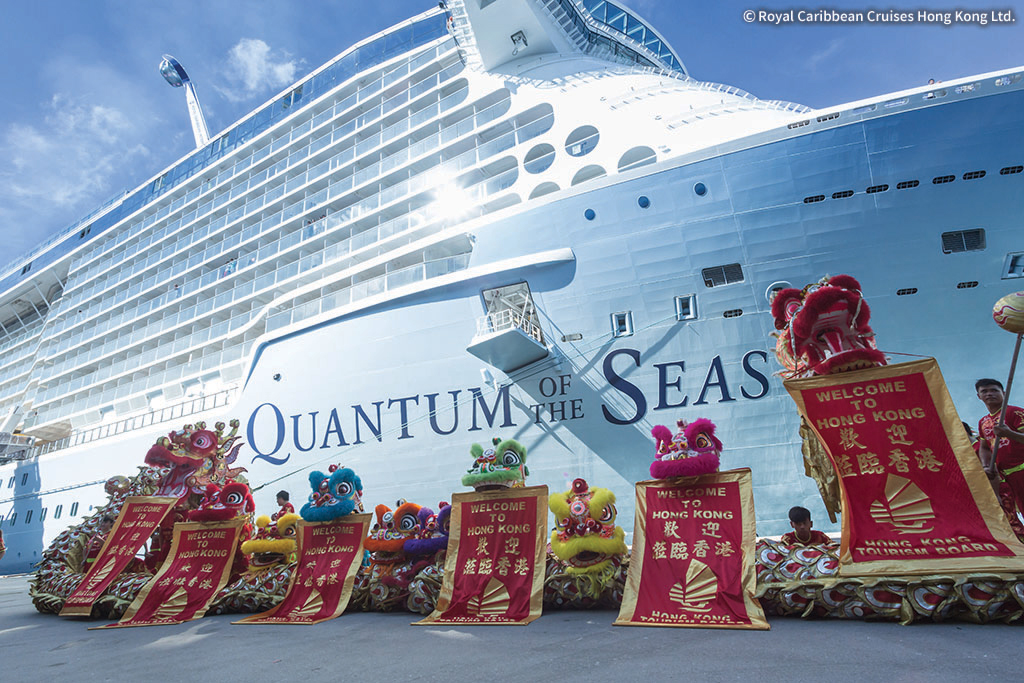 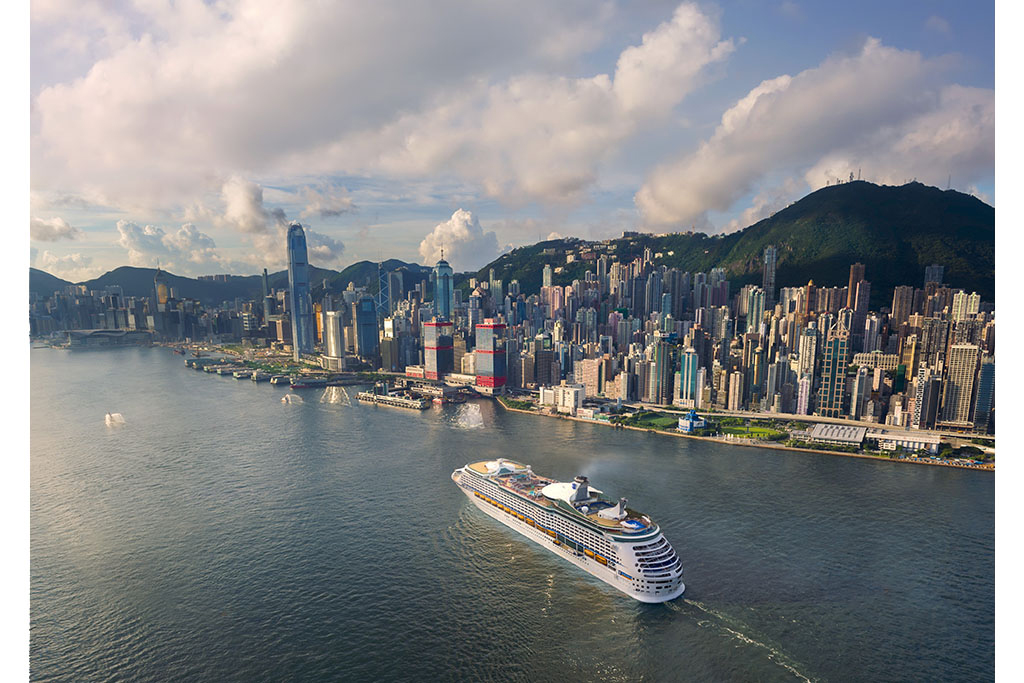 The continual increase in the number of world-class cruise arrivals in Hong Kong is a promising sign that cruise lines are recognising our city as a prime port option in Asia’s fast-growing cruise travel market.

Some of the world-class cruise ships to have graced our port include Quantum of the Seas, which is the largest cruise ship ever to have berthed in Hong Kong waters. We celebrated its maiden call in June 2015, and it revisited six months later for a mini homeport season.

And for the first time, Voyager of the Seas made Hong Kong its homeport for three months from July 2015, hosting more than 50,000 guests on 17 sailings.