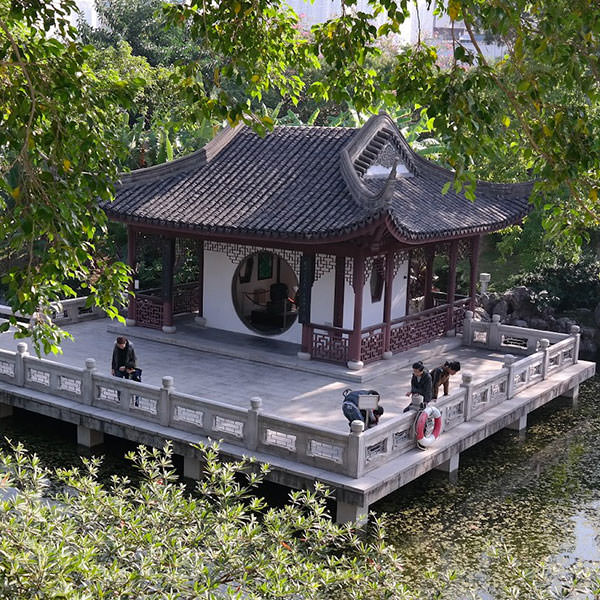 Despite the fact that most Hong Kongers practice a range of Chinese folk religion or Buddhism, Islam is not entirely a foreign religion. With 4.1% of Hong Kongers practising Islam, the number continues to rise and with it, Muslim-friendly amenities and activities to enjoy.

With over 70 halal-certified restaurants in the region, there is no need to worry about food while exploring Hong Kong. Astound your taste buds with authentic dim sum, delicious local delights and a slew of yummy desserts! 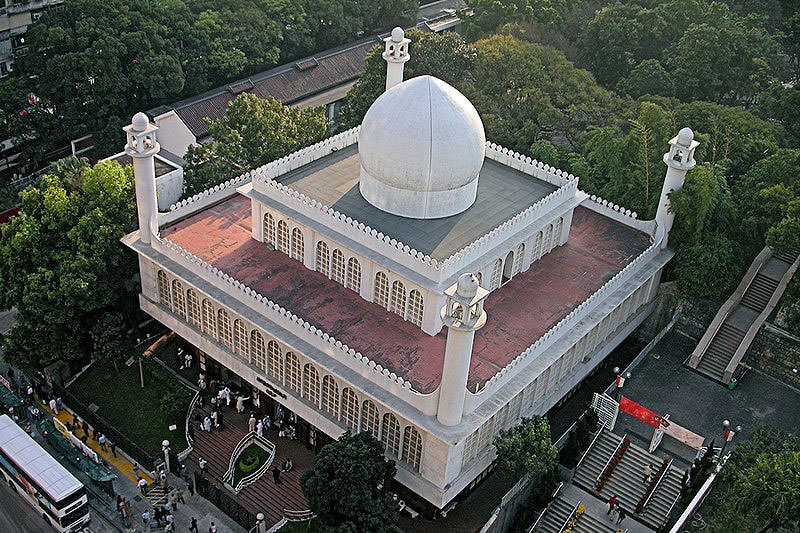 With a plethora of things to see and do, you can never truly settle on where to go and what to do first. If you want to explore a side of Hong Kong that is different from the rest, consider Kowloon. This Muslim-friendly district will allow you to experience the best of Hong Kong, whilst having a peace of mind knowing that all your religious needs are met.

#HZTip: It makes a lot of difference to start your holiday seamlessly. Fly directly to Hong Kong via Cathay Pacific and enjoy delicious halal in-flight meals, in-flight entertainment and luxuriate in the spacious seats. You can then maximise the rest of your day exploring right after you land! 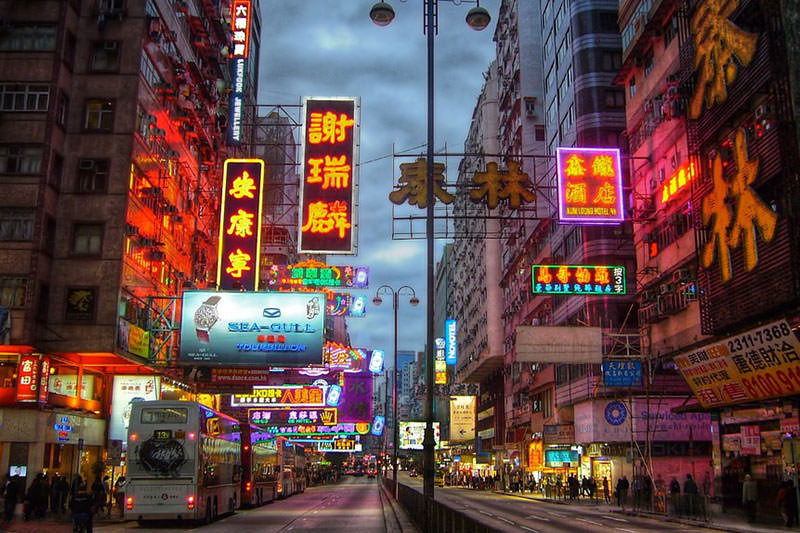 A densely populated urban area, Kowloon is often seen as the place that showcases the more authentic side of Hong Kong with its wonderful mix of cultures. Kowloon also has such a wide variety of attractions, most of which are Muslim-friendly. This also means that there is something for everyone – night markets, the Avenue of Stars promenade and the Kowloon Walled City park amongst the many varieties.

Kowloon is also home to many large malls and popular fashion boutiques. For those who are more familiar with an extravagant palate, the abundance of high-end fashion stores in the harbourfront area and around Tsim Sha Tsui MTR Station is just for you. While there are fancy shopping malls like 1881 Heritage, there are also those that offer more variety, such as Festival Walk Mall which boasts over 200 stores.  Harbour City, Hong Kong’s largest mall, is also close by! Housing everything from luxury designer brands to independent Hong Kong designer labels, you are spoiled with choices!

#HZTip: If you are looking for a budget-friendly shopping spot, fret not, there is a wide variety of night markets available in Hong Kong, one of which is the famous Temple Street Night Market where you can find everything you need!

This district also houses five mosques, with the biggest mosque in Hong Kong located adjacent to the infamous Kowloon Park. The availability of Muslim-friendly facilities here is a direct testament to how Muslim-friendly Kowloon is. 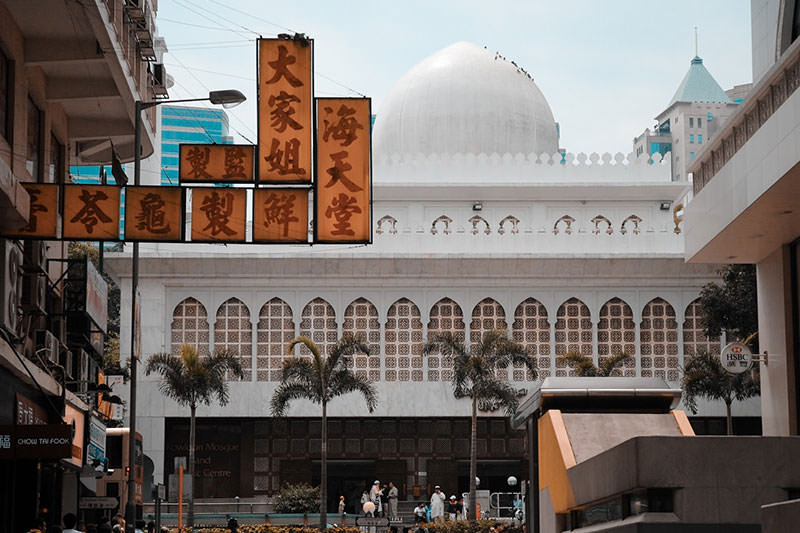 Located at the intersection of Nathan Road and Haiphong Road in Tsim Sha Tsui, Kowloon Mosque and Islamic Centre is the largest mosque in Hong Kong. Air-conditioned throughout, this mosque is one of the most iconic Islamic landmarks in Hong Kong – it can fit up to 3,500 people!

First established by the Muslim garrison stationed in the area, now known as Kowloon Park, this mosque represents the local Muslim community’s unique history. The Chief Imam of Hong Kong, Mufti Muhammad Arshad, has also been serving as the Imam and Khateeb of this mosque since 2001.

With four high minarets standing at a whopping 11 metres, this mosque is majestic in its own right. The structure also uses white marble on the paving and facade, embellished with detailed latticed windows all around. An important cultural site for all, the building includes three prayer halls, madrasahs and a community hall. The same community hall is used by Muslim organisations to hold programs during special occasions.

Fun Things To Do in Kowloon A serene harbour laying in the midst of this concrete jungle, Victoria Harbour is an iconic location in Hong Kong. Best known for its panoramic views at night and skyline, the promenades are always filled with locals and tourists alike. This bay area stretches 9km!

#HZTip: Marvel at the vast harbour when you’re discovering the Avenue of Stars or the Central Waterfront Promenade. If you find yourself by the harbour at 8pm, do not miss the daily display of Symphony of Lights as well. 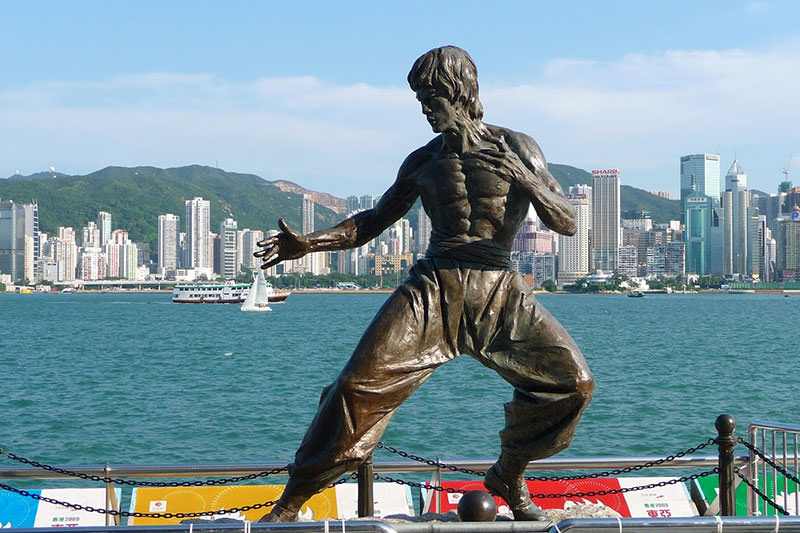 Hong Kong’s reply to Hollywood’s Walk of Fame, the Avenue of Stars is a must-see when you are in the district. Located right by the well-known Victoria Harbour, visitors can enjoy marvelling at the various handprints of various famous Chinese celebrities. Don’t miss the golden chance to snap a photo with a life-sized bronze statue of Bruce Lee! This observation deck is up on the 100th floor of the International Commerce Centre, the tallest building in Hong Kong. Sky100 Hong Kong Observation Tower is also the place to experience unrivalled views of Hong Kong from the skies! The deck also features multimedia exhibits, which educate visitors on Hong Kong, its people and their culture.

#HZTip: This tower can be accessed via the MTR, making it an easy stop for everyone. Plus, for Muslim travellers, there is a prayer room available! 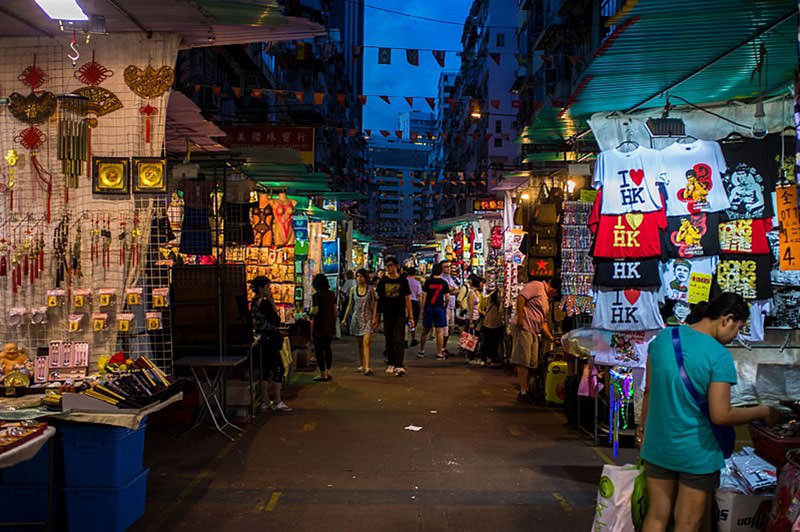 This late night street market breathes the locality and offers an insightful experience into the culture and the lives of the people in Kowloon. Often chosen as an inspiring backdrop for many movies in popular culture, the Temple Street Night Market is the place to find anything you need. From souvenirs to antiques, the variety of things on sale here will surprise you. Get ready to practice your banter and haggling when you’re there! 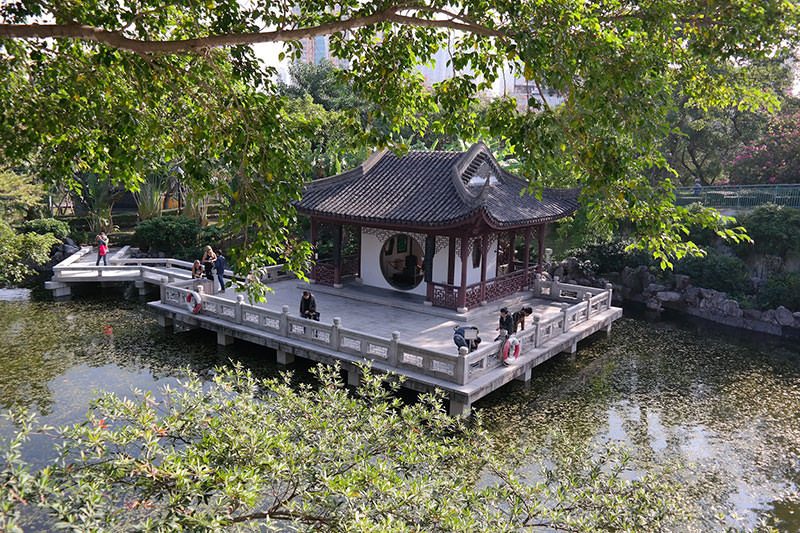 Initially an ungoverned, densely-populated settlement, the Kowloon Walled City was later demolished and transformed into a traditional Chinese garden. The garden is modelled after the Jiangnan Gardens of the early Qing dynasty. Despite the drastic change from a detached walled city to a magnificent Chinese garden, the area still holds many historic and cultural elements from the olden days.

This grossly-famed Walled City has also appeared in popular culture – in movies like “Brothers from the Walled City” and  “Long Arm of the Law”. In the movie “Batman Begins” Kowloon’s Walled City inspired a fictional walled neighbourhood called Narrow.

As a Muslim-friendly district, Kowloon offers a variety of halal food within the area. There are cuisines galore – from Turkish food, Italian and even Middle Eastern fare to entice you. There are also numerous vegetarian options available, so take your pick! 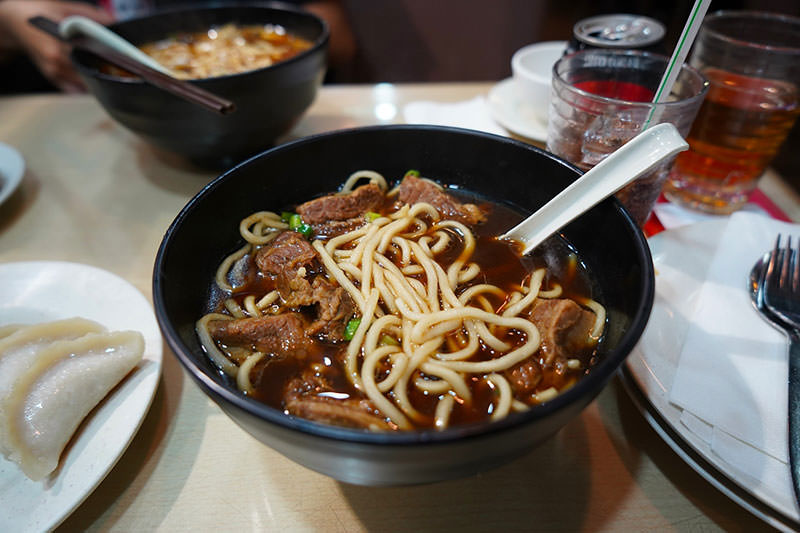 One of the most popular halal food joints in Kowloon is Ma’s Restaurant which serves authentic halal Chinese cuisine. The restaurant also offers a well-portioned set lunch, which is highly affordable.

Popular and widely-visited by locals and tourists, this spot is famous for the curry beef brisket with rice, Shanghai-style fried thick noodles with beef and braised beef brisket noodles. You must try their goulash dishes too – a hot favourite for many that patronise this food joint. With a menu that is 19-pages long, there is bound to be something that will tickle your fancy!

Another restaurant, located conveniently near the Kowloon Mosque is Hung’s Chinese Restaurant. Hidden in a corner of Chungking Mansion at Tsim Sha Tsui, it offers an array of Chinese food – and for the travellers, free WiFi!

This halal-certified restaurant boasts a wonderful dining experience with dishes that include stir-fried chicken with Chinese herbs, fish and vegetables. The portions here are huge! 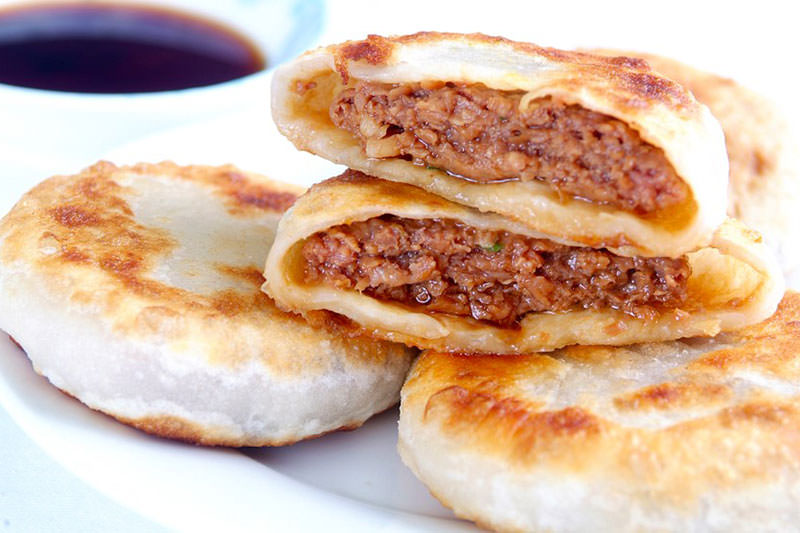 An establishment that started in the 1950s, Islam Restaurant has many local food awards under its belt. With two outlets in Kowloon itself, this restaurant is the locals’ favourite as well.

Some of their famous menu items include hot & sour soup and the juicy xiao long bao. While Chinese food is the typical cuisine offered, there is also a cold-cut platter, which includes spiced beef shank, tripe, tendon, chicken, jellyfish and ox-tongue.

If you are looking for something lighter on the tummy, head over to Chrisly Cafe. While the restaurant is not halal, the bakery section of the joint is halal-certified.

They offer a wide range of scrumptious, freshly-baked goods. Some of the more popular baked goods are pineapple bun, egg tart and the peanut butter biscuits. These make for great gift ideas for your loved ones back home! 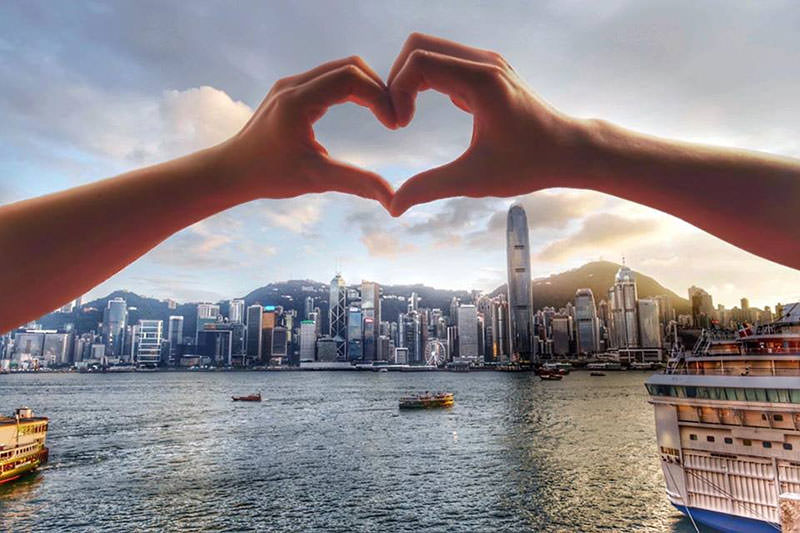 With a variety of things to see, do and eat in Kowloon, it is easily one of the hottest places for Muslims to explore. Unlike most destinations, Kowloon tells the story of a small Muslim community in a largely-Chinese nation. The culture here is truly a manifestation of the early generation of migrants. Witness how it has transformed over the years, especially in the areas surrounding Kowloon Mosque.